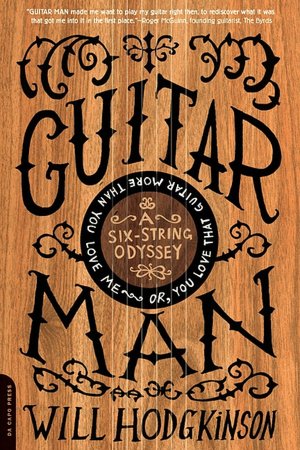 Will Hodgkinson dreamt of being a guitar legend but never got round to it. Now in his thirties and married with children, he still nurtures hopes of emulating his heroes. So he decides to learn the guitar from scratch, start a band and play a gig before it’s too late. On his journey of discovery he picks up tips along the way from Bert Jansch, Johnny Marr and the Byrds’ Roger McGuinn, and attempts to track down the elusive guitar legend Davey Graham in order to learn his instrumental classic ‘Anji’. Will his debut gig end in bum notes, ‘musical differences’ and disaster?

“Guitar Man made me want to play my guitar right then, to rediscover what it was that got me into it in the first place” – Roger McGuinn

“Twangs for the memory” – Gary Lachman enjoys Will Hodgkinson’s Guitar Man, one man’s journey into the history and romance of the guitar (Guardian review )

You can purchase Guitar Man on Amazon.